The Greatest Show in the West

The Swan Valley takes fall very seriously. The space between the great ranges - Mission and Swan Mountains - does not yield to winter without first staging a grand theatric performance replete with curtain calls, special effect lighting, and a story arc as improbable as it is compelling. My friend Cory, a wildlife photographer, and I are yearly ticket holders, attending the show every mid-October: it is not to be missed. It is the Greatest Show in the West.

Cool nights and the seasonal flow of moisture from the Pacific conspire to create the opening curtains of the great show. One moment, cool fog and mist. The next moment, the curtain opens revealing blue skies, snow-capped peaks and hills of gold. The show has begun.

If the western larch is king of the Swan, the quaking aspen is queen. And here, royalty does not matter. Beautiful is beautiful. The first act of the show prominently features a strong performance by the aspen. Its stands of clones command the audience’s attention with striking uniformity. Thin white trunks and wiry branches with leaves of gold, the aspens are show-stoppers. In spite of their diminutive presence in the Swan Valley the aspens rise to the status of co-star on the playbill. 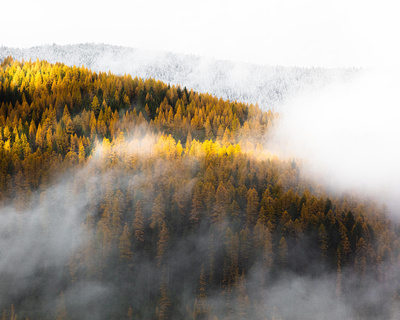 The first act concludes with high drama. Mid-autumn storms bring strong winds and valley snow. The curtain closes. The audience is left aghast. The sun sets on these stormy days with heightened suspense: what will the next morning yield? Intermission. 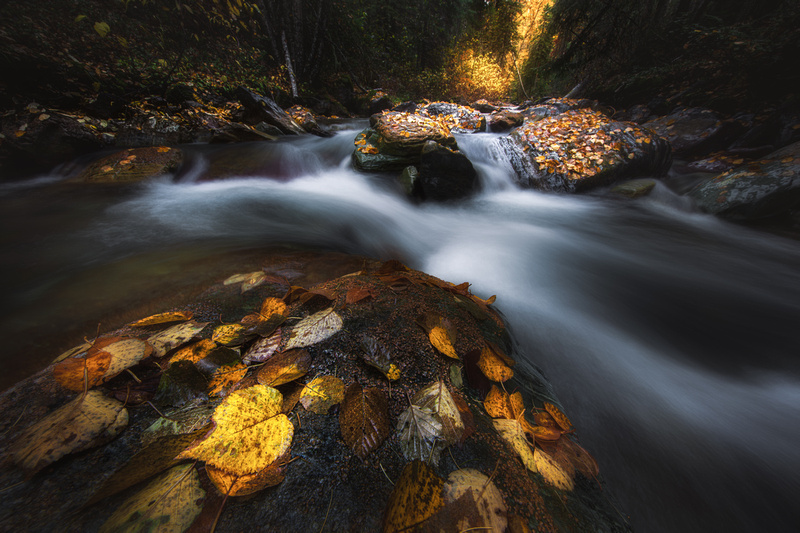 The audience is called back. The curtain opens: act two. The aspens are bare, their golden leaves now blanketing the forest floor. It is in this moment, that the western larch shines. What, from a distance, appeared as a generic stand of coniferous trees, now reveals large swathes of gold. This is the climax of the greatest show. Visually, it teeters on the edge of overstimulating, so abundant is the gold.

The unstable weather of autumn fuels the drama. Broken clouds and streamers of rain and snow move across the Swan Valley providing the audience a dynamic light show. Spotlight here, rainbow there and slopes of golden larch aglow beyond, the valley is a visual feast. Although the sun is the veritable star of the show, the larch steal the show with their radical display of light transmission. With or without the sun’s direct aid, their golden needles glow. At times, so capable are these yellow needles at gathering light, it is difficult to tell where the sun is actually shining.

It is at the end of the second act that the storyline falters. In the mountains it is easy to tell when autumn has started, but difficult to tell when it has ended. Or maybe it isn’t that seasons end so much as it is that another begins. No endings, just beginnings. Winter. It is a vertical presence. First, only on the highest peaks. Then, mid-mountain, and finally, the valley floor. It happens almost imperceptibly. Compared to the drama present in early fall, this final stage of the greatest show seems to languish. The larch eventually do perform their final number: dropping their golden needles. It’s brilliant. Soft yellow needles float in the air. Trails, roads and the forest floor glow warmly with a blanket of gold.

Curtain closes. Next up, 'Eternal Winter'.

Brian Christianson Photography
Thanks for your kind words, Velia and Patrick!
Velia(non-registered)
These are simply beautiful photos. Thank you for sharing them and the written word.
Patrick Shepherd(non-registered)
Beautiful photos with very descriptive prose.
No comments posted.
Loading...
Subscribe
RSS
Recent Posts
The Cynic and Idealist A Walk Across Acadia Spectre of the Brocken Shaped by Waves What catches YOUR eye? The Halfway Point I have something to say Learning to See Again The Beginning Saving the Great Burn
Keywords
Archive
January February March April May June July August September October November December
© Brian Christianson Photography
User Agreement
Cancel
Continue