Spectre of the Brocken 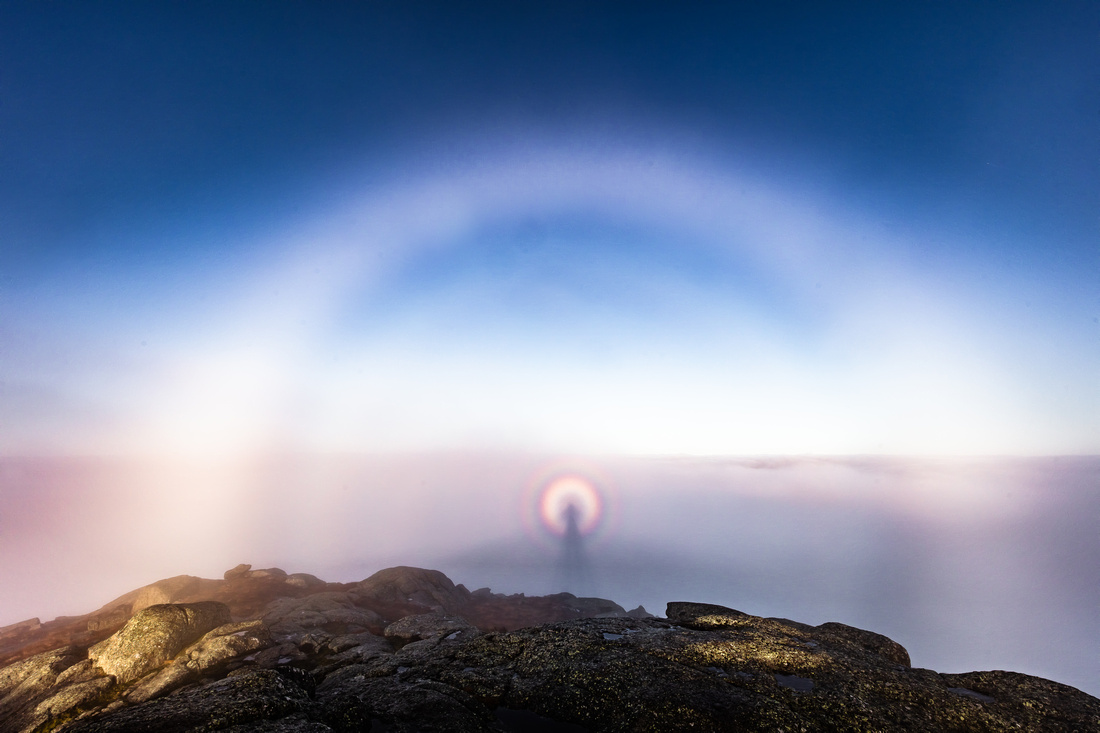 Out of the darkness,

Whose features were my own.

Following through on a dream less than 24 hours old, coffee in hand, my feet hit the trail at 2:55AM. The dream was simple, to photograph sunrise from the summit of the highest mountain in the Adirondacks, Mount Marcy. A fresh wave of high pressure combined with what was very nearly peak autumn foliage, held great promise for a dawn shoot. What’s more, after ten days of wandering around the Adirondacks, this was our final full day in the great mountains of New York. It seemed fitting to conclude our visit on top.

My goal was to gain the summit by blue hour, 6:30AM. 3 1/2 hours (2 1/4 mph) seemed a reasonable timeframe to meet that goal. I had loosely based my start time on the conditions of previous trails we had hiked in the Adirondacks: rocky, steep and wet. As it turned out, the eight miles up Marcy was not particularly steep or rocky, just wet. Illuminated by headlamp, the trail turned out to be a lovely cruise.

2 hours and 45 minutes later, I found myself improbably on the summit. 5:40AM. Uh oh. I was way too early. Blue hour was a full 50 minutes away and sunrise another 30 minutes after that. Not surprisingly, it was cold, wet and windy on the alpine summit. I quickly donned all of my layers and took shelter behind a small rock outcropping. And waited. In spite of any discomfort, I was happy to be there. After all, I had followed through on a 24-hour-old dream.

Dreaming, or the act of envisioning cool stuff, and followthrough, doing that cool stuff, had been sorely lacking in my life over the past month. Hitting the road for our second year of travel, I felt unease. We were leaving behind dear friends and a beloved landscape for the unknown. I had delighted in the comfort of being in and around Missoula for several months. Why leave all that good stuff behind? Why leave the comfort of a brick-and-mortar dwelling for a life of perpetual uncertainty? As glamorous as it seems, living in a van is not always comfortable nor is it particularly easy. We have to service - i.e. dump - our toilet daily; refill our water weekly; ration our power supply; seek out a safe and, relatively, legal place to park daily; and, accept whatever temperature Mother Nature provides. We do all of these things, the two us, in a 60 sq. ft. space (14 sq. ft. of floor space). The trade off, though, is priceless. Freedom. Sweet, sweet freedom. Freedom to, with the press of the gas peddle, transform our mobile home into a beach house, mountain cabin, or desert oasis. In spite of the virtues of an itinerant lifestyle, I had spent the better part of our first several weeks of travel sleeping in, moving slowly and grappling with our decision to travel another year.

Shivering on the summit of Mount Marcy, the mental fog of the previous month began to fade away. Whatever anxiety I had felt about leaving Missoula was beginning to disperse. This is why we travel. To feel, deeply: the elements, the land, the air. The young dream of watching sunrise from Marcy, turned out not to be a dream at all. No, it was an awakening. There, standing above a sea of clouds, vivid stars above with a bitter wind lapping at my face, Mother Nature was rousing me: wake up!

Nautical twilight transitioned to soft blue hour light. Then, an orange glow began to emanate from the southeastern horizon. At 5,344 feet, Marcy stands several hundred feet higher than the next tallest peak in the Adirondacks. On that morning, the cloud layer sat just 200 feet lower than the summit of Marcy. When that autumnal sun - that lovely, warming presence - rose, it did so not from behind a mountain, but from below the clouds, my horizon line. Not another summit stood in the sun that morning. I was alone, on an island, in a sea of clouds. Or so I thought.

Just after the sun rose, I sensed the presence of another being. My movements felt watched. Wasn’t I alone? Scanning the vista through the camera lens, my eye detected a faint apparition projected into the fog bank below. As I lowered my camera to engage both eyes and all of my senses, the apparition’s motions mirrored my own: a lowering movement, emanating from my position. The ghost in the clouds was engaged in a game of copycat. A couple of thoughtful, squinting moments later, it struck me: this was the infamous Spectre of the Brocken.

The optical phenomenon occurs with the perfect blend of sun and fog, typically on mountaintops. The subject’s shadow is projected into the upper reaches of the fog bank directly opposite the sun. The phenomenon includes the presence of multiple glories - circular, halo-like rainbows - around the subject’s shadow. This uncanny play of shadow and glories in mist received its name from a mountain in Germany where the phenomenon was first documented. One of the wildest aspects of the experience was the sense of three dimensions to the projected shadow. Because the surrounding air is rich with water vapor, the shadow begins near the source, in this case my body, and extends out for seemingly hundreds of feet into the cloud below. When I waved my arm, the movement stretched from me to my haloed shadow. Wild.

I had read about the Spectre of the Brocken in weather books, but had never before experienced it. I was giddy. Knowing that the projection was ephemeral, I frantically photographed and videoed the optical phenomenon. Out of the corner of my left eye, my non-viewfinder eye, I caught a glimpse of a high white arc, just outside the frame. Again, I lowered my camera. Directly above the Spectre of the Brocken and dropping to either side was a fogbow, a white rainbow. This too, fortuitously, I had read about in weather books. As the name suggests, fogbows occur in, well, fog. Like rainbows, fogbows appear at the anti solar point (opposite the sun), but, because of the tiny nature of the water droplets, all color is diffracted, leaving the viewer with a white rainbow. Fogbows form under the same conditions of the Spectre of the Brocken and, although not always, are often atmospheric companions.

This time, my camera remained at my side. I simply looked. I was transfixed. Mother Nature had indeed awakened me. If not for pushing my lazy body out of bed, I would have never bore witness to such a spectacular display of optical phenomena. I felt fully present, fully alive. This was an engagement with life - the rich, fleeting, ephemeral aspects of it - that no amount of technology could satiate. Standing there, on an island in the sky, the likeness of my being projected into the sky surrounded by haloes and a rainbows, was, in a word, transcendent. If I were religious, I would call it a religious experience. If I were spiritual, I would call it a spiritual one. If I were charismatic, I would start a cult. Being none of these things, I just stared.

The experience indeed awakened something in me. In the following week after the Spectre of the Brocken, I made it a daily practice to walk up mountains for sunrise: Camel’s Hump, Mount Mansfield and Jay Peak in Vermont; Mount Washington, Clay and Jefferson in New Hampshire; and, Pleasant Mountain in Maine. Although for nearly all of the subsequent peaks the conditions - low fog and clear skies - were present for the Spectre of the Brocken, I never saw it again. The specter, I suppose, had done its work. The stimulative visual experience had motivated me to keep moving: to seek more wild, to engage with the Earth. The fog had burned off.