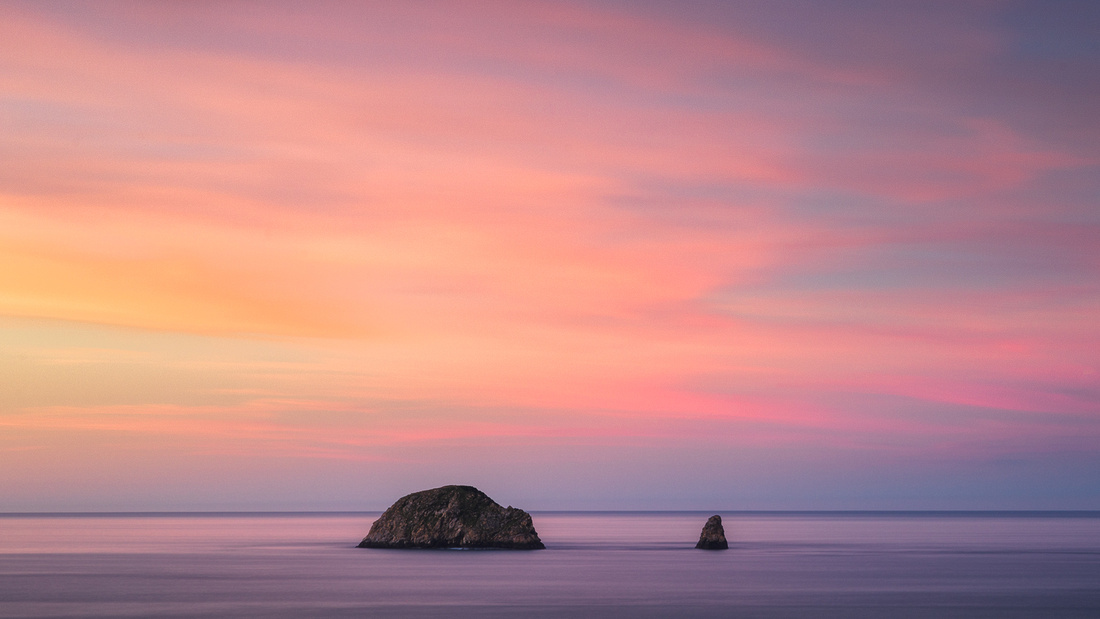 Winter on the Oregon Coast presents less like a succession of storms than it does a single, continuous storm with brief interludes. Looking out over the Pacific Ocean on the rare January bluebird day one suspects that they are simply in the eye of the storm, and that, just over the horizon, lies the advancing edge of winter’s eternal tempest.

This, of course, is an exaggeration. It does not rain every day on the Oregon Coast in winter. Nor, if forced to describe the wind, would I describe it as an especially windy place. Having spent a year living on the Rocky Mountain Front in Montana, I have known the pleasure of living in an especially windy place. Certainly, we experienced our fair share of nights being rocked gently - and sometimes, not so gently - to sleep by the winds while parked on the edge of the Pacific, but these winds generally accompanied discrete low pressure systems, and, as a rule, were not a constant feature of the weather. Although the wind can be fierce, out of all the elements of weather, it is the precipitation that reigns supreme. On average, the Oregon Coast receives 17 days of rain in November, 19 in January and 18 in February. The rain sometimes falls as a gentle mist, usually as soft showers and, occasionally, as heavy downpours: nothing a decent rain jacket, rain pants and rubber boots can’t handle. Finally, in terms of precipitation, If you are lucky, and we were, you’ll be struck by the rain’s frozen cousin, hail. Many times.

As for the temperature, it always seems to be 48 degrees. Day, night, rain or sun, thanks to the thermoregulating qualities of the Pacific, it’s always 48 degrees. I can tell you, with 99% certainty, that it will be 48 degrees on January 20th, 2022. February 8th, 2030? 48 degrees. It appears that the mercury, in the beginning of November, nestles into the 48 degree marker and proceeds to hibernate for the remainder of the winter.

Doubtless, there were times that we went several days without leaving the van, held captive in our 60 square foot metal box by gail force winds and heavy rain. All told, these periods were neither overly prolonged (4 days at most), nor especially frequent (every 5-8 days). We leaned into great books, board games, cooking, napping, tea drinking, YouTube video watching, movie viewing, writing and processing images. Just when cabin fever seemed imminent, a lull in the weather would arrive and so to would we.

The prospect of persistent wind and rain, at first blush, may sound deeply unappealing. In a vacuum, I’d agree. If this was the winter climate of say, Southern Minnesota, where I grew up, I’d seriously consider trading in landscape photography for crocheting. But, here’s the thing: this is the Oregon Coast, and it is ruggedly spectacular. This special section of the Pacific’s coastline features five hundred foot cliffs that dive straight into the restless waters of the ocean, sandy beaches that extend for miles on end, expansive sea stack gardens, tide pools teeming with alien lifeforms, massive thundering waves and innumerable sea mammals, birds and invertebrates.

Seeing the Oregon Coast in winter is not unlike watching a masterful painter put brush to canvas. It is an act of hydrologic creativity. As an observer, it is an exercise in bearing witness to the powerful forces that shape the landscape. Monthly king tides ravage the coastline, creating, literally overnight, entirely new beaches and dispensing with old ones. Heavy rains saturate the ground until whole slopes succumb to their increased mass and crumble into the ocean. Hemlock and spruce trees stand cliffside, sculpted by the wind. This is the season for this seasonal temperate rainforest: the vibrancy of the forests, the floor covered with ferns and the trees covered in moss, is sublime. In winter, the woodlands of the Oregon Coast make sense. In winter, the entire landscape makes sense. Hydrological and geologic forces are on display in real time. Save for a tsunami, tectonic activity or volcanism, the forces that sculpt the landscape are all present and entirely observable.

These forces, combined with the spectacular terrain of the coastline, make the Oregon Coast a prime landscape photography destination in winter. In a sense, following the painter metaphor above, photographing the Oregon Coast during its most creative season is an act in capturing artwork in motion. One moment the sand surrounding a piece of drift wood on the beach is perfectly smooth. In an instant, one wave later, the sand is rivuletted with tiny channels, resembling blood vessels. The next moment, smooth again. The next day? The driftwood has vanished. How special it is to engage with the ephemeral! Second-by-second, minute-by-minute, hour-by-hour, day-by-day, year-by-year, millennia-by-millennia, the coastal landscape is transformed by the artist, Mother Nature. If landscape photography is the art of tuning into the workings of nature, the Oregon Coast has my full attention. Routinely, I found myself perched on a cliff edge, camera firmly affixed atop my tripod, as massive waves crashed against the rocks below. Curtains of rain, bifurcated by crepuscular rays, hung out at sea, periodically passing over my position. I could not have been more engaged with the environment than I was in those moments. The camera was simply a tool that allowed me to experience the coast more deeply, more honestly and more sincerely than I would have without it. Most importantly, the camera forced me to be fully present: to not just see, but to feel the interconnectedness of light and form. Landscape photography requires that you be present to be effective.

Ostensibly, my tour of the Oregon Coast was fueled by the pursuit of photography. In practice it was a period a personal transformation. Forced to be present, I was also, for a moment, pulled out of my head. The worries of the day receded as surely as the tide. ‘Where will we park tonight?’; ‘What are we going to do about the leak in our roof?’; ‘What if the inflammation flare-up from rheumatoid arthritis (RA) continues to escalate and I can no longer hold my camera?’; ‘What if the van breaks down?’; ‘How is our travel budget doing?’; and on, and on, and on. For those moments, engaged with a composition, I experienced freedom from anxiety. It’s just me and the land. It’s perfect. It is bliss. Those calm, blissful moments, became addictive in the best possible way. They gave me space to feel relaxed, happy and grateful. I wanted more of that!

Those moments inspired me to to begin making small changes in my daily routine. I was inspired to exercise agency: control over what I had control over. I cut out alcohol. I researched, procured and began taking the best supplements for RA. I transitioned to a heavily plant-based diet. I drank more water. I bought a meditation app and began meditating (nothing like paying for something to keep you committed). I had flirted with all of these things over the years, but never all at once and never with such resolve. Living in such a small space allows for an incredible amount of control over habits. I can reach my supplements, the sink and a banana from bed.

The Oregon Coast was the teacher that I needed this winter. Raw, unfiltered, rugged, nature. The most beautiful beaches and grandest sea stacks are shaped by waves and, I think, so too, are we.

Mary L Lewis(non-registered)
You are a great story teller as much as you are a wonderful photographer. Thanks for taking us on this ride with you. :-)
No comments posted.
Loading...
Subscribe
RSS
Recent Posts
The Cynic and Idealist A Walk Across Acadia Spectre of the Brocken Shaped by Waves What catches YOUR eye? The Halfway Point I have something to say Learning to See Again The Beginning Saving the Great Burn
Keywords
Archive
January February March April May June July August September October November December
© Brian Christianson Photography
User Agreement
Cancel
Continue